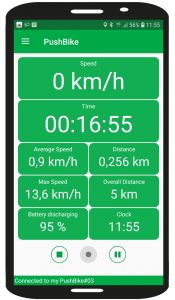 The PushBike App is an exemplary application which shows the possibilities of the Push & Touch technology. The specially developed PushBike App can be controlled via the three PushControl buttons.

In the app, all functions are controlled via the menu bar, where the buttons on the corresponding screens each have context-dependent functions. This makes it possible to carry out all functions that are normally entered via the touch screen using the three buttons of the Push & Touch technology. The normal operation of the smartphone is not impaired at any time and can also be used while standing still. Furthermore, a telephone function is integrated into the operation of the PushBike app.

The PushBike system will be available in different versions. The standard version contains all basic functions for controlling the app via the three-button operation as well as a hands-free and call function for the Bluetooth headset. The extended sports version is equipped with an additional speed or cadence sensor.

In addition to the bicycle computer, a map view is available. The trips can be tracked and exported as GPX files.

A music player is integrated for Bluetooth headphones or Bluetooth boxes, which can be supplemented by services such as Spotify or Amazon Music.

By installing an optional action cam on the bicycle, the function of a rear view camera can be implemented. The live view of the camera is streamed to the smartphone.

All recorded data can be analyzed live or afterwards and displayed in different graphs.  Integration of social media and multiplayer games for cyclists is also imaginable.