Based on the top seller LED bicycle light we have developed the bicycle product bLight. Its easy handling and assembly make it the ideal companion for the networked generation in search of the next urban trend.

The connection from the bLight to the smartphone is established via the latest Bluetooth standard. Just watch how intuitively the light can be switched on and off or how the light intensity can be controlled. After use, simply remove the bLight and charge the battery via USB.

As soon as a connection to the smartphone is established, the PushControl commands are forwarded to the app and the bLight and all additional functions are controlled via the smartphone.

The basic function of an LED driving light can be supplemented by the following listed features of the PushBike App. All functions can be individually adapted to the needs of the respective user.

Three buttons open the world to a unique way of smartphone control! 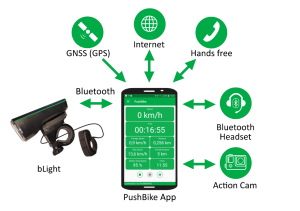